La Belle France was a thorough book, an in-depth exploration of the history of France. While some of the events in it I was already somewhat familiar with — the French Revolution and the Napoleonic escapades first come to mind — this book did a great job of filling in the rest of the story. It is a pretty sweeping account; it starts off with the days of the Romans and runs all the way through to the time of Mitterrand. It delves relatively deeply into some topics that were quite significant in the story of France, such as the Sorbonne, Louis XIV, and Algeria, and I found them very insightful. I had a vague awareness of the Sun King being significant and knew that there were colleges and universities in Paris that had long histories themselves, for example, before reading this history, but this book really fleshed out a lot of details that I otherwise never might have known. And it strikes a good balance between being too dense and leaving out too much. I definitely feel like I got a lot out of it, and while I will say it wasn’t the easiest read that I’ve had, I certainly wouldn’t say it was unapproachable.

I’d recommend this book for anyone who is interested in France, or in European history. A good chunk of the work is also about the monarchy, as is inevitable for an institution that ruled the nation for so many years (centuries…), so anyone interested in that sort of celebrity or personality story will also find a lot of good reading fodder here. The history is well told; the sort of rambling asides or other rabbit holes that can plague many histories aren’t found here. Topics are coherent and well fleshed out, and the strands that connect one to the next are generally pretty clear. I especially enjoyed the vignettes on things like the Sorbonne’s early days or the celebration of July 14, 1919. I also enjoyed the pace of the book — while many histories I’ve read tend to fast forward to the present and then spend the bulk of the time there, this one took a leisurely ride through the ages and only about the last quarter on the twentieth century.

In summary, pick it up! France has long been a significant player in the Western world, and this book offers a great look into what has led to where it is today. I feel far more informed about the state than when I picked it up, and I had thought I already was somewhat familiar with its role in history. If you’re looking for something to read that will expand your worldview, this is a great place to start. 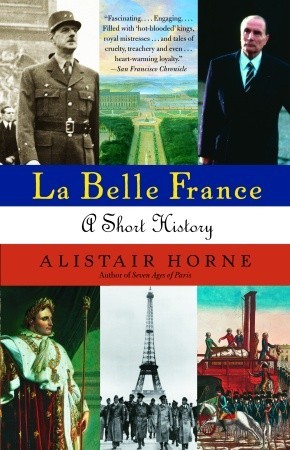